Being poor in a rich country.

Cuts in the welfare system, high costs of living - Austria is once again caught up in a debate about poverty.

Austria is once again caught up in a debate about poverty. Fuelled by last year’s government plans to cut the minimum benefit system and controversial statements by the former minister of social affairs, the question is how little money people can be expected to live on. Those affected tell their stories.

She had one life before 8 January 2012. And she has had another life since that day. Ms Sch. was in the prime of her life when she slipped on the ice and woke up one morning to find herself paralysed. As a successful self-employed management consultant, she had a large circle of friends and acquaintances, a nice apartment, and everything that goes with it. Her accident changed everything. Ms Sch. was unable to work for two years. After that she couldn’t find a new job. Many of her long-time friends turned away from her. Now she lives on 870 euros a month. “Every day is a nightmare,” she says, her voice filled with bitterness.

Her studio apartment in Mödling near Vienna is well kept and furnished with colourful decor. She says there are good days when she allows herself to be somewhat optimistic – and many bad days. Fighting against poverty and hopelessness is wearing her down. She has sent out hundreds of applications over the past few years, says the 50-year-old, but hardly ever does she get a response. “Apparently it’s no longer in fashion to respond. I’m too old, too overqualified, I have been out of work for too long, and I have been my own boss for too long. That’s a disastrous combination.” Most of the 870 euros in unemployment assistance she gets each month goes towards rent, electricity, heat and internet. She pays 100 euros a month towards a loan for her parents’ house, where her father lives. Her savings are long gone. “I have nothing left to live on,” says Frau Sch. “That’s just the way it is.”

When we visited her a few weeks ago, she was optimistic. A passionate cook, Ms Sch. had compiled a list of products to give away in exchange for donations – jams, confits, pickled vegetables. She even sent the list to her municipality. However, as so often happens, there was no response. A few jars of jam is all she sold. “It gets to a point where you no longer want to talk to anybody and you don’t want to chase after people,” she says. “Now I sit at home and crack nuts I have collected in the hope that I can sell them. Next week I’ll find out whether I can help out a street food vendor in Vienna. If that doesn’t work out, I might as well shoot myself. All I need is ten euros a day so I can provide for myself and my cats.”

What bothers her about the current debate [summer 2018, editor’s note], she says, is that long-term unemployment is often deemed to be self-inflicted. “Not everyone who doesn’t find a job is a benefit scrounger. I paid into the system for 25 years and now I don’t get any support. None. I think it’s important to take a closer look and support those who have paid in a lot.”

The Journalism Award “from below”

The Journalism Award “from below” for respectful poverty coverage was created in 2010 as a project of the Austrian Anti Poverty Network. It is aiming to promote a kind of journalism which reflects the many facets of poverty, treats people concerned in a respectful way, allows their voices to be heard, lets their realities become visible and examines the societal causes of poverty. The prize “from below” is designed by people experiencing poverty and by journalists. The jury exclusively consists of people experiencing poverty.

Since 2015, with the support of the ERSTE Foundation and the EAPN (European Anti-Poverty Network), an international dissemination of the prize has been in progress and workshops have been organised. Most recently, the Journalism Award “from below” was presented for the first time in Hungary, Croatia, Finland and Iceland. This article by Anna Gasteiger was awarded in the print category in 2018.

The government is planning to discontinue unemployment assistance next year. If those plans are implemented, Ms Sch. will only be entitled to needs-based minimum benefits. The government is currently [2018, editor’s note] working hard to reform this scheme. But it won’t be providing more money – not even for former high achievers like Ms Sch. On the contrary. Although the planned cutbacks primarily target foreign nationals and large families, Austrians might be receiving less money soon as well. The maximum monthly amount is expected to be set at 863 euros. The federal provinces, however, can further reduce this amount if the housing costs in their region are unusually low.

The planned cuts run counter to observations by poverty experts. While overall poverty has slightly declined in Austria and is relatively low compared to other EU countries, the gap between income and expenses is putting more and more strain on many people, says Martin Litschauer, head of the Caritas social counselling centre of Lower Austria. Even working people are increasingly having trouble making ends meet. “Incomes are failing to keep pace with constantly rising expenses. People need more and more support.” This support is often provided by NGOs such as Caritas because public administration is pulling back, says Litschauer.

Eighteen percent of the Austrian population was at risk of poverty and exclusion in 2017, which is equivalent to around 1,563,000 people. The threshold for people at risk of poverty stood at a monthly income of 1,238 euros. However, people living in a household with low work intensity and those who face significant challenges meeting basic needs are also vulnerable.

The list of criteria comprises nine items, such as a household being unable to meet regular and unexpected financial expenses, unable to afford a car, a mobile phone or a washing machine, unable to spend one week on holiday away from home each year or to keep their home adequately heated. People who cannot afford at least four of these items are considered severely materially deprived. The standards have changed over the past few years, says Caritas expert Martin Litschauer. We all have to accept that TV and mobile phones are part of people’s lives now.

Statistics show that unemployed people, non-EU citizens, single parents, and people with little education are most affected by poverty. Illness often exacerbates the risk of slipping into poverty. As happened with Ms Sch. from Mödling. Or Mr S. from Vienna.

Mr S., a ventilation technician by trade, worked for a sausage vendor in downtown Vienna when he decided to see a doctor because he suffered from permanent fatigue. He was diagnosed with diabetes, had to take three weeks of sick leave and lost his job. That was seven years ago. Mr S. now lives with his Slovak partner, who is not entitled to any benefits, on 647 euros of needs-based minimum income a month – half the target rate for couples. He pays 100 euros in rent for a 20-square-metre apartment and 125 euros to repay debt. He buys food at the social supermarket, or “Sozimarkt”, as the 62-year-old calls it nonchalantly. In the conventional supermarkets he only buys products that have a 50-percent discount sticker on them. The Turkish store around the corner offers dishwashing detergent for one euro. But still, he says, “it all adds up”. Mr S. has installed a food sharing app on his mobile phone that notifies him when people are giving away free food anywhere in Vienna. He often spends hours travelling across the city on the bus or the underground in order to pick up expired tins or old bread. He has little else to do, after all.

He used to like to go to football games at the stadium, he tells us. “But I can no longer afford that, except in the 20th district, where you can watch the amateurs for free. I liked to drink beer, but I don’t mind not having any. Other people go and buy street food, I go to the social supermarket. I mean, I don’t really care. But when I take the dog out in the morning and I don’t have a smoke, I go crazy.” Smoking, he says a little guiltily, is his big vice, something he just cannot give up. “How can you quit smoking if you have problems all the time? If you lead a quiet life, you might not need it. But I’m always waiting for something.”

He’s waiting at the doctor’s office, or at the social welfare office. Or he’s waiting for a reply regarding his partner’s job prospects. Austria’s public employment service does not support his 50-year-old partner in finding a job due to her poor knowledge of German – and without a job, she is not entitled to government support. She is currently taking a German course. Mr S. doesn’t believe it will help much though: “She is the oldest of five children and had to help her mother work in the barn instead of attending school. She’s not the brightest. She doesn’t even speak proper Slovakian. How is she supposed to learn how to speak proper German? And why does she need to speak German to do a cleaning job?”

Mr S. has been through a lot. Occasionally, he’s even been at odds with the law. He deals with his situation in good spirits and gets along as best he can. He wants to fight so he and his partner get the full 863 euros.

At one point during the interview, however, he is on the verge of tears. His partner’s sister is in hospital in Slovakia, he tells us. “She’s probably going to die. My partner really ought to go and see her. But we can only wait for her to die. We’re saving the little money we have so we’ll be able to attend the funeral.”

Original in German. First published in News print magazin number 40/2018 and on 17 October 2018 on news.at. The article was published with the state of facts as of October 2018.
Translated into English by Barbara Maya.

This text is protected by copyright: © Anna Gasteiger / News. If you are interested in republication, please contact the editorial team.
Copyright information on pictures, graphics and videos are noted directly at the illustrations. Cover picture: Ms. Sch. Photo: © Lukas Ilgner / VGN 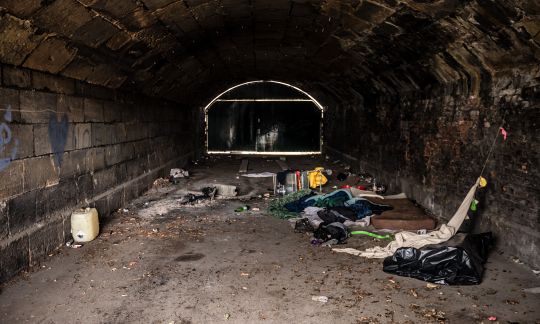 In the shadow of poverty

Homelessness in Austria: Vienna in the spotlight 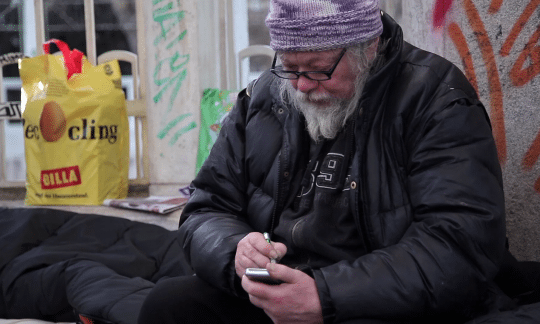