Amid tear gas attacks the Kosovan parliament ratified a border demarcation agreement with Montenegro. The country has moved a huge step closer to its goal of visa-free travel to the Schengen area – a dream of many young Kosovars.

It takes about 30 minutes by taxi to drive from the city centre of Priština, Europe’s youngest capital, to the airport. You’ll pass by shopping malls, prefabricated apartment blocks, countless car repair shops and unplastered brick houses. Many Kosovars dream of taking this route, checking in their luggage at the counter and boarding a plane to Vienna, Copenhagen, Berlin or Prague. However, what many young people in Europe take for granted is denied to them. Kosovo is the only European country whose citizens need a visa to enter a Schengen country. Those who want to visit relatives abroad, attend a festival or consider spending a semester abroad to study face a lengthy bureaucratic ordeal; they have to collect documents, request account statements, and join the long queues in front of the embassies. So much for the feeling of freedom.

Kosovo is last in line

Leaving the small Balkan state of Kosovo to enter the Schengen area is a privilege people have to wait months for. Things are different in Kosovo’s neighbouring countries. Visa restrictions for Albania and Bosnia were lifted in 2010; Serbia, Montenegro and Macedonia were offered visa-free travel as early as 2009. Kosovo is the last in line. This is also due to the fact that Kosovo’s independence still is a contentious issue within and outside the European Union. Yet at one time the country could have even been a sort of EU and U.S. prestige project on the Balkans. After NATO air strikes had ended the Kosovo War in 1998/1999, and following a UN resolution establishing a “substantial autonomy” for the province of Kosovo and the setting up of the UN interim administration mission UNMIK, Kosovo declared itself an “independent, sovereign and democratic state” on 17 February 2008. Despite billions of euros in aid, Kosovo remains one of Europe’s poorest countries. Its Albanian majority population had long yearned for this independent state, much to the annoyance of Serbia, which still considers its former province to be a part of its own territory. Today, however, ten years after the country become independent, many children and grandchildren of those who fought for this state just want to be able to leave the country for a while.

Among them are people like Flamur, 25, and Vjosa, 19, both students in Priština. He is studying computer science and programmes websites for foreign companies on the side; she is studying German and wants to become a translator. When they were born, the socialist multi-ethnic state of Yugoslavia had already collapsed. They can only vaguely, if at all, remember the war that forced hundreds of thousands of families to flee their homes. Their childhood was marked by reconstruction, starting with the destroyed houses of their families and working up to the country itself, which to this day is still fighting for its place on the international stage and is still not recognized by five EU member states – Greece, Slovakia, Cyprus, Spain and Romania. Today, with Kosovo celebrating its tenth year of independence and Priština’s centre ablaze with the state colours of blue and gold, they are sick and tired of being isolated in their home country. They want to see European cities, and visit family and friends abroad. They do not necessarily want to emigrate but would like at least to have the chance to build a future, even in an entirely different country.

Sitting in one of the city’s cafés, the two students talk about their wishes and dreams. Flamur would like to complete his Masters in Computer Science in Vienna, but in order to get a visa he must prove that he has at least 6,000 euros in his account. “Even an entire family does not earn that much money in Kosovo in a year,” he complains. Vjosa, who has just started studying, has other goals in mind. She would like to work in Munich for a few months where part of her family lives: “In a restaurant, a bar or a hotel. I don’t care as long as I can see another city,” she says. Vjosa and Flamur have never travelled further than their neighbouring countries – to Albania, Macedonia and Montenegro.

You often hear stories such as those of Flamur and Vjosa in the bars and clubs of Priština, a city that is considered a teenager among Europe’s capitals. Only few other European cities have so many people under 30. The hip bars that offer veggie burgers, avocado sandwiches and freshly squeezed orange juices hardly differ from bars in Berlin or Hamburg. If you are an “international”, you can lead a comfortable life with little money. The relatively low prices when compared to Western Europe are, however, still high for Kosovars, whose average income is around 300 euros: 1 euro for cigarettes, 3 euros for lunch, 350 euros for a spacious flat in the city centre. Unemployment among young people is high, and there are practically no social benefits. It’s not only the local economy but also the diaspora that keeps Kosovo alive – emigrated Kosovars who wire a small sum in euros to their families each month. The young people who stay behind try to work for the “internationals” – in nongovernmental organisations, development projects, embassies and think tanks. Delegates from many EU member states come here to convey European values. But the Kosovars, who would like to experience Europe for themselves, are not allowed to leave.

Pro-European Kosovo and the EU as an impediment

Why is Kosovo – a country that is considered the most pro-European country in South-Eastern Europe according to the Balkan Barometer – still the region’s only country to be denied visa-free access to the Schengen area? In Kosovo, where the EU’s flags and information centres are everywhere, citizens must feel closer to it than they really are. The question is: how long will they remain loyal to the EU? With each year that passes as they wait for visa liberalisation, the EU becomes less popular, while Turkey, a new player, is gradually spreading its influence, for example by buying the energy distribution network and building mosques. This does little to stop migration: an increasing number of people are leaving the country illegally.

2015 saw a downright mass exodus. 50,000 to 60,000 people emigrated in just a few months – from Serbia via Hungary to Germany, Austria and Switzerland. Many of them sold their houses, only to be deported back to Kosovo a few months later because their asylum applications had been rejected.

Who is to blame that people like Vjosa and Flamur are not allowed to leave the country? After all, Kosovo has been engaging in a visa dialogue with the EU for six years. However, two EU benchmarks long remained unfulfilled: the fight against corruption and organised crime and the ratification of the border agreement with Montenegro. At least the latter demand has now been fulfilled. After two and a half years parliament gathered the necessary majority to ratify the agreement yesterday evening – despite heavy protest by the nationalist opposition party Vetëvendosje. Its deputies tried to stop the agreement by releasing tear gas; the plenary hall had to be cleared several times. Then, after five attempts, they finally had a result: 80 of 120 delegates voted in favour of the agreement and thus sealed the end of “decades of isolation”, as Kosovo’s president posted on Twitter.

I congratulate the #Kosovo MPs from bot government & opposition that just ratified the border demarcation agreement with #Montenegro with 80 out of 92 MPs voting for. I thank friends from US and EU officials for support as well as #Montenegrin leadership for working with us. 1/2

In early February the EU took a step towards Kosovo, offering the country, along with the other five Western Balkan countries, the prospect of EU membership. Contrary to Serbia and Montenegro, which could join the Union in 2025, no target date was set for Kosovo. In any case, it is unlikely that accession will take place fast because the requirements to be met along the way are high. But it is a signal that the EU has not forgotten about Kosovo.

Ultimately, one of the biggest impediments is the European Council, which brings together the heads of government of all member states. Many of them dread a large influx auf migrants from Kosovo. Former Austrian Minister of the Interior Johanna Mikl-Leitner (Austrian People’s Party) personally travelled to Priština in 2015 to declare in a press conference that Kosovars would not be granted asylum in Austria. However, young people such as Flamur and Vjosa do not want to flee; all they want is the chance to travel legally at last – and get a taste of freedom, something their peers in the EU take for granted.

Original in German. First published on 22 March 2018 on Fluter.de.
Translated into English by Barbara Maya.

This text is protected by copyright: © Franziska Tschinderle. If you are interested in republication, please contact the editorial team.
Copyright information on pictures, graphics and videos are noted directly at the illustrations. Cover picture: Like many Kosovars his age, Flamur has never travelled further than neighbouring Albania, Macedonia and Montenegro. He would like to complete his Masters in Computer Science in Vienna – if he gets the chance. Photo: © Martin Valentin Fuchs. 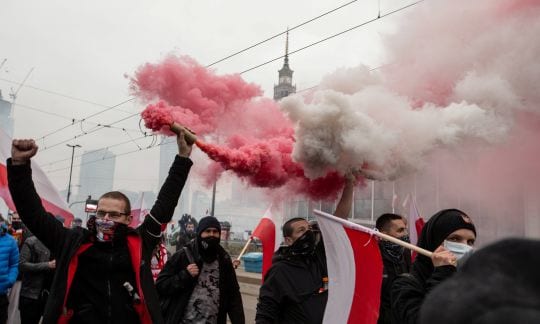 The power of mythmaking

From solidarity to illiberalism