What’s life like for gays and lesbians in the countries of the Western Balkans?

Serbia’s prime minister is a lesbian. This does not change the fact that many people in the Western Balkans still believe that homosexuality is a disease. Homosexuals in the Western Balkans suffer prejudices, discrimination and violence. New legislation still hasn’t changed this. What’s life like for gays and lesbians in these countries?

Flanked by bodyguards, Ana Brnabić weaves her way through the celebrating throng. Lady Gaga songs blast from the speakers; a cannon fires glitter into the air. Belgrade is celebrating its rainbow parade today [16 September 2018, editor’s note]. And Ana – 42, wearing a shirt and jacket, with a serious look on her face – is the guest of honour everyone has been waiting for. “I hope that this society will become more tolerant and that violence will subside,” says Brnabić directly into the TV cameras, screaming to drown out the music.

It has been a year since Brnabić became Serbia’s prime minister, breaking two taboos with her candidacy. She is the first woman in the country’s history to head the government – and she is lesbian. This caused a sensation in conservative Serbia, where many still believe homosexuality is a disease and orthodox priests “purify” the streets with holy water after a Pride parade. Brnabić is the first homosexual politician in a region where the LGBT community is rejected by the vast majority. A 2017 study by the Equal Rights Association (ERA) and the World Bank concluded that every third person from an LGBT background has experienced violence due to their sexual orientation. Eighty per cent of respondents said they would not hold hands while walking down the street. The prime minister, however, claimed shortly after taking office: “This country is not homophobic!”

Talking to activists such as Alexandar Savić, you realise that this is not true. He’s throwing a small party for the community today, in a centre on Belgrade’s Kralja Milana Street, with two police officers patrolling in front of the building. Wine is served in plastic cups. It’s movie night. Every now and then someone might spit against the window or throw a beer can, says Savić, shrugging his shoulders: “That’s nothing compared to what happened in previous years.” Between 2002 and 2009 and again between 2011 and 2013 the parade had to be cancelled for security reasons. Hooligans had battled with police on the streets, throwing stones and Molotov cocktails at participants and smashing shop windows. There were similar clashes in other countries of the region. Participants of the Pride 2011 in Split were attacked with bottles; a year later they were bombarded with fireworks in Tirana. In 2013 unknown persons attempted to set fire to an LGBT centre in Skopje. There were no incidents in Belgrade in 2018. “For the first time, participants outnumbered the police and we were allowed to continue to party in a park after the parade,” says Savić, visibly proud. Is this a sign the Serbian society has become more tolerant?

Koen Slootmaeckers, a political scientist who has been conducting research into the Western Balkans’ LGBT community for years, is not so sure about this. “The only reason why there is a parade is because Serbia is negotiating its membership with the European Union,” he says. The pressure the Western Balkan countries face from Brussels leads to a phenomenon he calls “pink washing”. “Politicians use LGBT issues to appear more progressive than they really are,” says Slootmaeckers, citing an example: “President Vučić accepts the parade once a year, so that pictures of people celebrating go around the world. He appoints a lesbian prime minister and says: ‘Look how modern and European we are.’” Slootmaeckers criticises that the European Union has lost sight of what is truly important – “the lives of people away from the parade”.

Rights only on paper

Gay and lesbian couples in the Western Balkan countries are neither allowed to marry nor to adopt children. Civil partnerships have been recognised in Slovenia since 2006, in Croatia since 2014. Nevertheless, the majority of the populations of both EU countries voted against gay marriage in a referendum. In the other countries of the region homosexual couples are de facto invisible before the law. If their partners are hospitalised following an accident, they are denied visiting rights and any right to information since they are not considered the next of kin. The anti-discrimination laws adopted in all Western Balkan countries except for Macedonia in the process of moving closer to the EU were considered achievements. Anyone discriminated against on the basis of their sexual orientation – in the work place for example – can press charges. In practice, however, these laws have no effect: on the one hand, because police and prosecutors have not been sufficiently sensitised, and on the other hand, because people are afraid to come out. According to a new study conducted by the Equal Rights Association (ERA) in cooperation with the World Bank, only eight per cent of those affected report cases of discrimination.

The question as to what everyday life of the LGBT community is like is difficult to answer: first, because people can only be themselves in their own homes and a few clubs, and second, because most of those who go public belong to a privileged circle of activists who work for one of the many LGBT organisations. They attend workshops in Scandinavian countries and have good contacts to Western European embassies. Those who are allowed to travel and see that the situation is better in other countries no longer feel quite so alone at home. What about the people who cannot do that?

In a darkened room on the top floor of a prefab tower block in Belgrade, a young Albanian with tousled hair and dressed in sports trousers lights a cigarette. He can only dream of flying to Western Europe – Kosovo is the only country in the Western Balkans whose citizens still need a visa to travel to the EU. At home, in Kosovo, the young man came out only to his closest friends: “At the beginning of the semester my professors asked: ‘Which of you is one of those?’ I didn’t dare say anything.” Although more “internationals” live in Pristina than anywhere else in the region, there aren’t any significant places for the community to meet in the city. The Pride parade in 2018 was only the second to be held in Kosovo. The man in sports trousers says he only meets men online. “You lead a hidden life. That was also the reason why I broke up with my ex-boyfriend. We could never live out our relationship in public,” he says.

There are reasons why gays and lesbians are worse off in the Western Balkans than in Western Europe. “This has to do with the post-conflict society on the one hand and the nationalisms among the successor states of former Yugoslavia on the other,” says political scientist Slootmaeckers. In some parts of Yugoslavia, homosexuality was legalised as early as in the 1970s. 1987 saw the first feminist conference in Slovenia broaching the issue of “lesbian love”. However, during the Yugoslav wars in the 1990s patriarchal attitudes regained dominance in society. “Deserters were vilified as homosexuals, and this negative ‘traitor image’ has persisted to this day,” says Slootmaeckers. The church has been gaining influence since the 1980s. Today Albania’s Muslims, Serbia’s Orthodox and Croatia’s Catholics share the belief that the traditional family is something “national” and homosexuality a lifestyle imported from the West. According to this rationale, someone who is gay cannot be a “true” Croat, Albanian or Macedonian. When a participant of an Albanian reality show came out live on air in 2010, men in his hometown took to the streets in protest, claiming that he did not have Albanian blood in his veins. Zagreb’s archbishop Josip Bozanić called on worshippers in 2013 to vote against gay marriage in a referendum. He claimed that people were “responsible for their home country”.

In no other Western Balkan country is the church as influential as in Croatia. 87 per cent of the approximately 4.2 million Croats are Catholics. Only Poland, Malta and the Vatican have a higher percentage. Croatia’s clerics do not only preach; they are politically active. In May 2013 conservative citizens’ initiatives collected 700,000 signatures for a referendum to ban same-sex marriage, which was held in December of the same year. Priests collected signatures after church services. The campaign was successful: today marriage in Croatia is once again exclusively a union between a man and a woman.

If you speak to Daniel Martinović about the year 2013, he says something curious: “Unnoticed by the public, the LGBT community saw a small baby boom back then.” Martinović, 37, lives in Zagreb and has set up an organisation that helps homosexuals to become parents. Along with Slovenia, Croatia is the only country of the region to allow same-sex couples to live in civil partnerships and have children, using roundabout means. Martinović explains how this works: “Lesbian couples order sperm from a sperm bank in Denmark by mail. They perform artificial insemination at home because it is prohibited in Croatian clinics. Then the biological mother states that the father is unknown, and her partner is granted custody.” However, pressure from conservative groups is not declining but increasing. The most important actors are the Catholic Church on the one hand and an ultra-conservative movement called U ime obitelji (In the Name of the Family) on the other. “They communicate through social networks to claim that the ‘gay lobby’ wants to take children away from heterosexual couples. They publish interviews with self-proclaimed experts warning that children of homosexuals are susceptible to becoming drug addicts and suicidal,” says Martinović.

Being who you are

Ana Brakus doesn’t let these campaigns influence her. The 28-year-old journalist has been in a civil partnership with her girlfriend Matea for a year. The figurines of the wedding cake still sit on the window sill of their apartment in Zagreb – two women holding hands. Brakus has frequently been faced with hostility in her life. Now she has realised that she has only one life to live and says: “I don’t want to waste it by not being the person I want to be.” Perhaps what Ana does is more effective than a rainbow parade? She shows people around her – not only once a year but on a daily basis – that she is not willing to change. When Ana is waiting at the food stall late at night, while the vendor cheerfully wraps two greasy Burek in rustling paper singing in Croatian about how much he loves women, she looks into his eyes, smiles and says: “Me too.”

Original in German. First published on 21 November 2018 on nzz.ch.
Translation into English by Barbara Maya.

This text is protected by copyright: © NZZ / Franziska Tschinderle. If you are interested in republication, please contact the editorial team.
Copyright information on pictures, graphics and videos are noted directly at the illustrations. Cover picture: Participants of the Belgrade Gay Pride parade on 20 September 2015. The march, the second in a row since the event was marred by violence in 2010, was held without incidents amid tight security. Photo: © Alexa Stanković / AFP / picturedesk.com 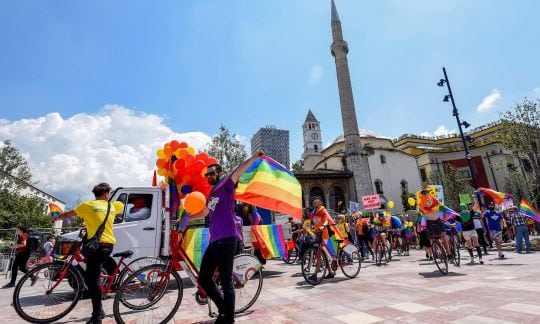 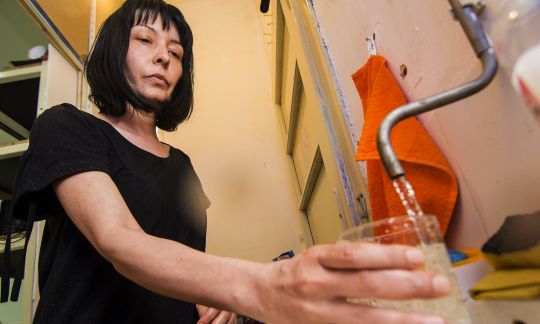