While Europe was recently facing the most important elections in its history – with the concept of identity once again set to play a crucial role – we visited the places where Europe’s worst nightmares have come true. From Srebrenica to Kosovska Mitrovica – cities that fell victims to nationalism – some who were youngsters then have come back to reinvent the identity of the country dissolved 20 years ago.

“I always wanted to leave here, but something would always stop me: as if I have some unfinished work, or some mission to accomplish.” These are the words of Zana Syla (26), one of the directors of Mediation Center, the only NGO in Kosovska Mitrovica to have two presidents who represent equally both peoples in Kosovo. Mediation Center deals with legal issues, the most complicated concern in a country where the two peoples literally don’t speak the same language. Zana was 18 when she first crossed the bridge on the Ibar River, dividing the city of Kosovska Mitrovica — one of many symbols which, along with flags (Serbian, Russian, US and Albanian), mark the division of the territory lacerated by conflict.

Until she turned 18, Zana thought of the other part of the city as enemy territory. “When I started to work with the people in the Serbian part of the city, I understood that they have the same preoccupations as I. We are not throwing bombs at each other anymore but there is still a mutual feeling of diffidence. Our goal is to deconstruct the stereotypes that have been created over the years in order to focus on our living standard, the only thing that is supposed to preoccupy us all. We have been manipulated by the same political establishment that also existed 20 years ago, both in Belgrade and Pristina.”

Who would come back to a country of 1.8 million inhabitants, no bigger than the Abruzzo region in Italy, where different passports and car number plates are needed to circulate freely? A country where the sensation is that time stopped when the war ended in 1999 — and where on the walls of the city it is still possible to read graffiti such as “This country is worth dying for”.

“I came back in 2008, the year of Kosovo’s independence. I decided to study journalism because I’d been frustrated by how the media were manipulated in the 1990s.” Besa Luci is one of the founders of Kosovo 2.0, an online magazine based in Pristina — one of the few that appear in three languages: Serbian, Albanian and English.

Through her work Besa says that she tries to promote civic awareness and a national Kosovo identity: “The majority of people here consider themselves more Albanian than Kosovar. There is nothing wrong with that, but we believe that a Kosovo identity exists as well and that’s one of the nation’s elements that’s in a phase of developing.” Besa confesses that she feels betrayed by the EU, mostly because of the lack of freedom of movement: “While the rest of the region has obtained visa liberation, we are still in limbo.”

Twenty years after the war, Kosovo still hasn’t found peace on its borders or with its past: what is considered genocide by Albanians is seen in Belgrade as the usurpation of part of its history and territory. On 6 October 2019, citizens of Kosovo voted for their new parliament. The elections were caused by the unexpected resignation of then prime minister, Ramush Haradinaj, after being summoned for questioning by the Special Prosecutor’s Office in the Hague, which is probing wartime and post-war crimes in Kosovo.

These were the fifth elections since independence, and they saw the defeat of some members of the political élite. “The popularity of President Hashim Thaçi, one of the main protagonists of the battle for the independence of Kosovo, is shrinking because of the failure to keep promises: the most important relates to the complicated path of Kosovo in the EU integration process and the never-accomplished visa liberation process,” explains Una Hajdari, a journalist we met in Pristina and a real symbol of the double identity of the country. Her father is Kosovo-Albanian and her mother is Serb; she speaks both languages perfectly and represents that link Kosovo is desperately seeking in order to create a dialogue between its two parts. In November 2020 former Kosovo president Hashim Thaci has pleaded not guilty to war crimes charges in the 1990s war against Serbia as he appeared for the first time at a special international court in The Hague. Thaci was charged with war crimes and crimes against humanity during an alleged campaign by the ethnic Albanian Kosovo Liberation Army (KLA) between 1998 and 1999 against civilians it deemed to be its enemies.

“I came back three years ago, and I don’t plan to leave this place again. I think I am more likely to have a major impact here rather than in Denver, New York or Belgrade.”

“We are still waiting for the final agreement between Belgrade and Pristina but the politicians from both sides are gaining from the current status quo situation. Meanwhile citizens are leaving. Whole families are going away in search of better education and employment.” Jovana Radosavljevic, 30 years old, came back to Northern Mitrovica after studying for 15 years in the USA. Today she works for the NGO New Social Initiative, which helps promote dialogue. “I came back three years ago, and I don’t plan to leave this place again. I think I am more likely to have a major impact here rather than in Denver, New York or Belgrade. I understand those who are leaving but there are still a few crazy enthusiasts like me who decided to come back. Here you are never bored, that’s for sure.”

Liza Gashi has the emigration statistics: “From 2013 to 2017 173,000 people left Kosovo. That’s nine per cent of the whole population and these are mostly citizens between 25 and 44 years old. According to the World Bank almost 60 per cent of youngsters are unemployed in Kosovo. People are leaving because this is a territory poisoned by the politics: even a seven-year-old kid knows the name of our prime minister.” Liza, 28 years old, is founder of the Pristina-based association Germin, dedicated to Kosovo emigration. She herself left Kosovo when she was 16. “Today we are encouraging people to come back and start working here. We also invite the Kosovo diaspora to invest in the ideas of the youngsters here in Kosovo.”

The battle for the recognition of Kosovo continues; more than a hundred countries in the world have recognised its sovereignty, including 23 of the 28 European Union states. Belgrade plays its card with what it calls the “unrecognition” of Kosovo, a campaign for the cancellation of recognition of the country’s independence. One of the last countries that “unrecognised” Kosovo was Togo, at the end of August 2019. Meanwhile, in 2018, Barbados was the 97th country to recognise it as an independent state. Serbia is accused of engaging in a Russian-backed campaign to promote the withdrawal of recognitions, the same campaign that blocked Kosovo’s candidacy to join Interpol. This action pushed Pristina to start a trade war with Serbia, raising tariffs on Serbian and Bosnian goods by 100 per cent. The only hope was that the results of the latest Kosovo elections, won by the left-wing nationalist party Vetëvendosje and its leader Albin Kurti, would have brought some changes in a country still deeply polarised — hostage to a Serbia which doesn’t want to recognise it and with little progress towards EU inclusion.

In March 2020, the newly elected PM Kurti, leader of the Self-Determination Movement party, lost a confidence vote. After a court ruled that fresh elections weren’t needed, a thin majority in Kosovo’s parliament voted to install Avdullah Hoti as prime minister of a new coalition, supported by two smaller ethnic Albanian parties. Kosovo is now heading towards the new snap elections after the Constitutional Court ruled that the government is illegitimate.

Another apparently unexpected move occurred at the beginning of September 2020, this time from Washington. The current US president Donald Trump invited the leaders of these two troublespots (Kosovo and Serbia) to sign an economic deal in the White House that might enhance relations between the two. It is considered that this economic agreement could eventually promote investment in both countries. On the other hand, it will be remembered mostly for containing a mutual recognition between Kosovo and Israel as well as Belgrade’s and Pristina’s willingness to move their Israeli embassies to Jerusalem.

The American-backed economic agreement comprises a kind of stab in the back to the current EU policy which has been mediating for more than a decade to find a political solution between the foes. First and foremost, the EU tackles Serbia’s refusal to recognise Kosovo’s independence. What the Economist defined as “an awkward embrace” is likely to be an unstable one. According to the Times of Israel, relying on sources close to the Serbian government, Serbia won’t be willing to move its embassy to Jerusalem if Israel recognises Kosovo. What is certain is that a really rare agreement came out from this tricky triangle: Kosovo-Serbia-Israel. The question is whether it will last if Donald Trump doesn’t win a second term.

“Europe is seen here as a pretty weak entity. But I feel European because we are in Europe”

“Europe is seen here as a pretty weak entity. But I feel European because we are in Europe,” emphasises Lazar Rakic, the other president of the NGO Mediation Center, proud of the work that his organisation is doing: “We have succeeded in solving 1,300 legal disputes. We hope to be able to continue backing dialogue between the two sides. There are still those who want this city to function and to live properly. There are still plenty of things to achieve but I believe that changes can be made, only thanks to youngsters.” “We are still hostages of the older generations, who helped divisions to persist,” Zana Syla, his colleague, laments, “and this is not fair.”

The same desire unites the youngsters who decided to come back — that local voices be more included in the political process. The biggest problem is that fear reigns in both communities. A fear of being incapable of bringing political change — and of never, even once in a while, being able to forget the names of the political representatives.

This text is protected by copyright: © Marina Lalovic. If you are interested in republication, please contact the editorial team.
Copyright information on pictures, graphics and videos are noted directly at the illustrations. Cover picture: The team of lawyers of the NGO Mediation Center: Albert Feka, Besnik Voca and Ines Aljovic. Mediation Center deals with legal consultancy, the most complicated aspect of a country where two populations literally do not speak the same language. The NGO has two presidents, Lazar Rakic and Zana Syla, one Serb, the other Albanian. Both of them confessed they had a coffee with youngsters from the other side of Kosovska Mitrovica only a few years ago. Photo: © Martino Lombezzi

This article was produced as part of the Milena Jesenská Fellowship for Journalists at the Institute for Human Sciences (IWM) in Vienna, supported by the ERSTE Foundation and Project Syndicate. 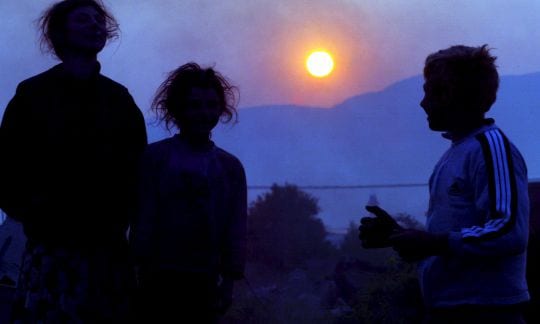 The demographic crises at the Western Balkans has huge impact on marginalised Roma communities. 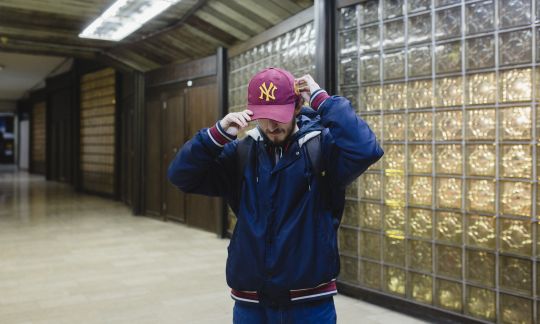 When will young people in Kosovo get a taste of freedom, something their peers in the EU take for granted?
previous More Stories