Regardless of whether we define Roma in the educational system in Slovakia as a social group or national minority, it is obvious that this group is subject to a school policy to which they are required to adjust without any possibility of participating in its creation. This ongoing situation in our school system causes discrimination and prejudice, giving children and young people unfavourable prospects for quality education. Could the newly established Romani Culture Museum address such shortcomings in the Slovak school system?

One of the long-term educational strategies of the school policy regarding Romani students in Slovak schools is to emphasise and promote equality in the name of liberalism. Assimilation and asserting the requirement that minorities adjust to the dominant norms is the result of such approach. It ignores social and cultural differences in ordinary schools that cause discrimination, in particular, the ethnic segregation of Romani children which led the European Commission to initiate infringement procedures against Slovakia in April 2015. Ethnic segregation results in a loss of self-confidence, a lower level of education, reduced motivation and a negative impact on school performance in general.

If such separation is long-term, it may eventually become habitual, in other words, normative discrimination, where both parties become so accustomed to discrimination that from their perspective, they are no longer able to distinguish between right and wrong, or victim and perpetrator. In practice, it is manifested in the fact that even Romani parents request segregated education. Possibly they would insist that their children be placed in special schools because it is a family tradition. Habitual discrimination can only be addressed through the intervention of an independent third party. This could soon be the role of the planned Romani Culture Museum in Slovakia, which would act as a mediator when addressing and settling disputes related to the discrimination of Romani children at schools, or as a school facilitator in transforming the Roma’s approach to themselves and their culture.

In practice, it is manifested in the fact that even Romani parents request segregated education. Possibly they would insist that their children be placed in special schools because it is a family tradition.

The intervention of an independent institution as a third party in (self)discrimination disputes at schools is important because both school administrators and teachers themselves incorrectly justify their decision to segregate Romani children by claiming that in this way they can ensure better instruction with an individual approach.

Although initially only applied to poor Romani children, the school’s discriminatory policies forced the Regional Court in Prešov to establish that it amounted to ethnic segregation. The lack of will to create differentiated school policies towards minorities and their collective needs (for example, Romani language) or the individual learning needs of children (funds for purchasing teaching and compensation aids) contravenes the acknowledgement of social and cultural diversity as an actual social phenomenon, something which the schools in Slovakia are unwilling to, or cannot, or do not know how to work with purposefully. The current methodological and pedagogical practice in Slovakia does not differentiate between children based on their cultural or language needs and disregards the abundance and diversity of the family and social backgrounds of Romani children.

It is equally interesting that to date, all the national projects so far implemented with European Union support and coordinated by methodological centres explicitly talk about approaches designed to react to the specific needs of “children from marginalised Romani communities”. However, programmes accredited by the ministry, which are the outcome of these projects, are not structured to equip the teachers with the skills and capabilities to work effectively with Romani children from excluded communities or with children from a different social and cultural environment. The programmes are based on educational approaches that treat all the children the same, as if colour blind, and that do not compensate for the disadvantages of specific children or address their individual educational needs. This type of approach then produces the conviction that the fault lies with the child.

A new minority school system should do more than simply preserving or reproducing the language and history of Roma.

A new minority school system should do more than simply preserving or reproducing the language and history of Roma. It could also contribute to the gradual formation of Roma as a political nation, if it ensured that Roma also have a certain level of school autonomy giving them decision-making competence regarding the management and funding of the schools. Romani experts could also participate in designing their own curricula and determining the number of lessons per each subject. This would help to critique and subsequently eliminate the current content and hidden curriculum framework, which is based on the essential attitudes about Roma and aims to educate in the belief that Romani culture and language are permanent categories whose essence is biologically given beforehand.

According to these attitudes, Roma are perceived as heirs of a culture of thieves and fortune-tellers, or in better cases as seasonal workers and blacksmiths, and in the romantic perception as nomads with dance and music in their blood. In school practice, this attitude is projected in the approach of teachers who assume that Romani children have a future in the development of manual skills, predetermine them for blue collar careers and therefore willingly invest extra hours and funds to extend technical education.

In connection with this approach, our education system has recently seen the growth of branches of secondary vocational schools which are built directly in poor settlements and where Romani students are trained for two years for careers that have no place in the 21st century labour market, such as the career of “practical housewife” for Romani girls. The teachers’ approach to non-Romani students is completely different; they develop their competences in working with computers and in natural sciences and mathematics. This approach towards Roma has been institutionalised and established for a long time. It not only empowers prejudice and stereotypes, but also rejects any discussion regarding culture and identity as social constructs based on critical (self)reflection when designing a school curriculum. 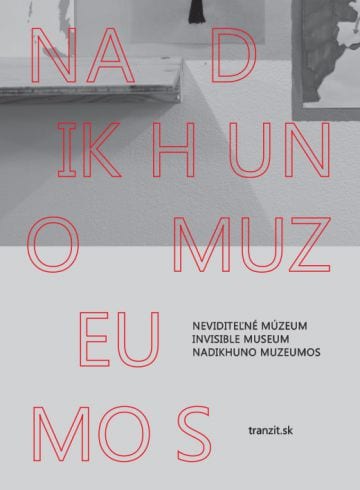 The book Neviditeľné múzeum / Invisible Museum / Nadikhuno muzeumos is the extention of an exhibition at tranzit.sk in Bratislava from 29 November 2017 to 27 January 2018. The exhibition, which was initiated by artist Oto Hudec, was a proposal to reflect on the idea of a museum of Romani culture in Slovakia. This book was conceived as a new format for the further envisioning of the museum together with artists, academics, cultural practitioners and activists working in Slovakia and other European countries.

I have already publicly voiced my concerns regarding the growth of minority racism and nationalism on the part of Roma. I shared this concern in 2008 in connection with the standardisation of the Romani language, along with the participation of several representatives of the older generation who in the early 1990s were part of a more radical wing of the burgeoning national minority in Czechoslovakia.

Placing unreasonable emphasis on otherness through the school system or its curriculum in the name of pluralism can result in an unhealthy feeling of exclusivity, exceptionality or direct moral superiority, self-exclusion and the defence of reverse racism, or in the unreasonable promotion of traditional values which are contradictory to the requirements of liberal principles, equality and autonomy. I’m referring to the application of the traditional patriarchal approach of Romani men toward women, either through buying/selling future brides or not providing Romani girls with opportunities for a better education.

Experts from the Romani community in the field of pedagogy, culture and history should be the ones to urge school authorities to engage in expert discussions on what and how Romani matters should be taught. The participation of Roma in the creation of school policy and the state curriculum could help to enhance the quality of education, while also overturning stereotypes and putting an end to the dissemination of prejudice in schools. In fact, an advisory group composed of Romani educational experts, with Dr. František Godla as its chairman, was established at the Ministry of Education. However, Eugen Jurzyca, the newly appointed minister of education, cancelled it in 2010.

The new Romani Culture Museum could also actively create a space where the Roma themselves and their emerging elites could re-evaluate the approach to forming their (self)image. I understand that Romani history, which is frequently presented through the educational system, is also interpreted in the context of stories of exiles and outcasts, which is perhaps why many have problems identifying with it. Such an interpretation of history through the state curriculum strengthens – either positively or negatively – prejudices and stereotypes in the forming of a personal as well as collective identity. It is also clear that even the modern history of the Roma is not sufficiently and objectively researched and processed. The topic of the Romani Holocaust is a case in point.

Thus, it is logical in view of these shortcomings that some have the feeling of owing a debt and uncritically revive this view of history or even modify the past (a younger sibling of history). This phenomenon is sufficiently illustrated by the election of Romani kings, which has taken place in Slovakia since the 1990s, despite the fact that it is completely clear to everybody that Roma have never had kings at any time in their history. The older generation of Roma in particular is convinced that creating false history can offer the Roma a healthier (self)image and self-consciousness and subsequently unite them in their struggle against the humiliating conditions of poverty that many of them must face every day. From the very beginning, this approach was seen as ineffective and illusory, but at the same time it still shows how many (in my opinion for understandable reasons), remained voluntarily imprisoned in their own imperfect history.

The editors of this publication aspire to pose the question of how the education and brainpower of the Roma can be processed and presented within the context of the new Romani Culture Museum. We have already hinted at some of its roles in the text above. We most certainly agree on the fact that this museum should not only present education, name its current issues and offer a historical view; it should also become a co-participant in education. Therefore, when building this institution, it is important to keep in mind from the very beginning the implementation of the aforementioned participative approach; in other words, to gather educated Roma from the young, emerging generation who will reject historical determination and begin to reflect freely their presence when co-creating their own personal identity, as well as the identity of this proposed new modern institution.

First published in October 2019 as part of the book “Neviditeľné múzeum / Invisible Museum / Nadikhuno muzeumos“.
Translation from Slovak to English by Elena and Paul McCullough.

This text is protected by copyright: © Vlado Rafael / tranzit.sk. If you are interested in republication, please contact the editorial team.
Copyright information on pictures, graphics and videos are noted directly at the illustrations. Cover picture: Emília Rigová, Constant Metamorphosis, 2016. Photo: © Adam Šakový 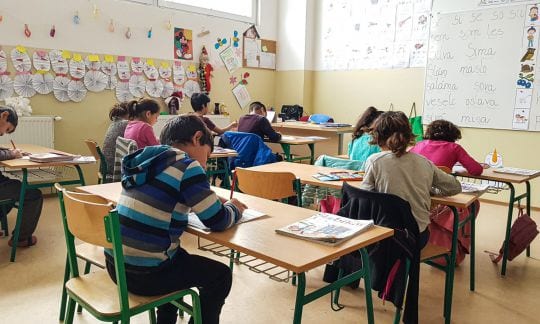 “The future of Roma people is education.”

Roma children are facing growing segregation in Slovak schools - more than in any other European country. 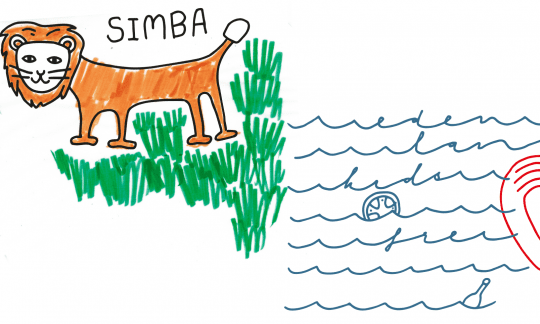 The lioness from Bregu i Lumit