The power of mythmaking

(…) Central Europe, therefore, should fight not only against its big oppressive neighbour but also against the subtle, relentless pressure of time, which is leaving the era of culture in its wake. That is why in Central European revolts there is something conservative, nearly anachronistic: they are desperately trying to restore the past, the past of culture, the past of the modern era. It is only in that period, only in a world that maintains a cultural dimension, that Central Europe can still defend its identity, still be seen for what it is.

Elitist Kundera’s vision of culture and its role in communist Central Europe may be, but there is certainly still more than just a grain of truth in the observation, that from the western perspective a journey into Central Europe could be in fact a task for the cultural palaeontologist. Historical obligation is the flesh and blood of the bond that holds together the nation. Nation might be an imagined community (Anderson) but it is more real than any state institution or other (class, race, gender and so on) distinctions. It is more real because a lot of sense-creation was invested in it. Myth-making activities almost solely concentrate on the imagined past of the nation that didn’t necessarily exist at the time.

The Treason. The Uneven Fight. The Brave. The Tolerant. The Defenders of the Faith. All these scripts are written through the surprisingly anachronistic education, resembling XIX century school not just in the form but also in the forming – of young minds. The music is written, it is a question who can play the tunes right. For a foreign observer, the level of nationalism in Poland could be quite stunning, also among seemingly liberal, cosmopolitan middle-class. The late-night discussions about 1939 and what the country could do between Nazi Germany and Communist Soviet Union could last forever, even among the young, the third generation after the War.

In “Turbopatriotyzm”, Marcin Napiórkowski shows how the past functions as a validation for the present. Because the so called “cursed soldiers” (żołnierze wyklęci) fought a desperate underground fight against the communist occupation after 1944/45, the government’s fight against the “post-communist courts” is well justified. No matter that just 10% of active judges started their careers before 1989, and none of them in the supreme court – it is the myth that one is evoking for the justification of the action here and now.

Communist propaganda effectively discredited any class language, to the extent that the left never really made a splash in Poland after 1989, with the pragmatic post-communists dominating this flank, until 2005 when the support for them collapsed. The anti-capitalist rebellion was effectively staunched by the corset of neoliberal notion of economy being best left outside the hands of the politicians, shared by almost all the members of the political and media elite, at least until the 2007/2008 crisis.

At the same time, the transition mostly touched upon the framework – the law, the economics, the rules – not the subject of the transition (the nation itself and its self-perception) and its inner motivations. The technocratic language of the 1990s and early 2000s seemed particularly mismatched when it came to the analysis of cultural complexes. The whole body of the Polish national canon seems in a way to compensate, elevate and even sanctify the victimhood to the levels in which only national tragedies seem to strike the right note when it comes to unify and mobilise the nation around a common cause. The mourning.

The mirror that the nation holds for itself to see has been broken. At least from the perspective of “the modern”, the term “politics of history” (polityka historyczna) – meaning simply how the state and its representatives decide to approach the history, what kind of activities, initiatives, museums and so on it supports – was an anathema. The mainstream left the myth-making to the right. And the used their time well. Today, historical supplements are offered with almost every significant journal and newspaper, books about “the women of the resistance” or the “birth of the Polish state” are filling the shelves of the bookshops.

Individualism of the transition called for emancipatory stories: about the Jews and the untold history of their pogroms during the German occupation and after the liberation by the Red Army. Stories of the intellectuals that after “the Hegelian bite” (Czeslaw Milosz’s expression for those who believed in communism) converted to actively support the opposition. They weren’t stories that could connect – and allow to identify – the wider public to its own past. Quite the opposite. The past was to be disenchanted.

The fact that the nation is a group built upon the shared illusions (lies, some would say) of the common history led to the impossible task of getting rid of those illusions once and for all. Where it is only this history that binds people together such an effort could not succeed. Exorcising the potentially precarious national spirit from the soul of the young Polish democracy by well-meaning pro-Westerners backfired when the linear goal of the transition – anchoring the country in the Occident and its institutions – was achieved.

When the present is validated by the perceived compliance with the imagined past, the stronger myth wins. Since the very beginning the right-wing dominated the internet, for the lack of almost any traditional media, which occurred to be the most profitable political investment of the last 30 years. Niche publications spread like a bushfire once the distribution powers of the social media were employed. Conspiracy theories, personal attacks, discoveries of wrong (communist related) ancestors, “real” histories of secret police involved with the former president plagiarised from the famous thrillers (true story). Once the gloves are off, no tool is ill-suited to smack the enemy in the head.

Calling upon the myth of “cursed soldiers” makes perfect sense to discredit the reality in which one competes for power as a “road to serfdom”, a kind of post-communist matrix, where secret connections explain everything: from making fortunes in 1989/1990 to the collapse of the socialist economy and its elephantine plants and, most importantly, serve as a psychological relief to those who can ascribe their real or imagined failures to nepotism and unscrupulousness of their fellow citizens. Liberalism with the individual story of success, with gains and punishments for one’s own actions, could not provide a remedy of even comparable power.

First published on 24 May 2019 on europesfutures.eu.

This text is protected by copyright: © Leszek Jażdżewski. If you are interested in republication, please contact the editorial team.
Copyright information on pictures, graphics and videos are noted directly at the illustrations. Cover picture: Far-right supporters in Warsaw during an annual Independence Day march on 11 November 2020. Many participants turned up in cars and on motorbikes to observe social distancing. But others marched on foot, and some threw firecrackers at police in riot gear and into windows with LGBT rainbow flags or signs of anti-government sentiment. Photo: © Newspix / Action Press / picturedesk.com 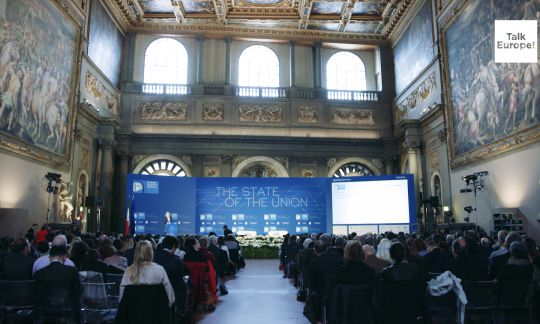 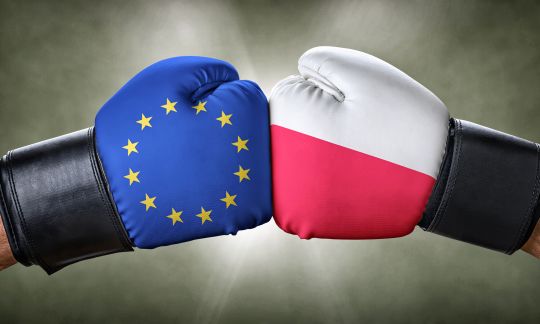 “Poland on a collision course with the EU”