The year of President Zuzana Čaputová

Viera Žúborová about Slovakia in 2019

The seminal event in Slovak politics last year was the election of a political newcomer who has become the face of decency in public life and respect for the rule of law.

Asked about the most important event in Slovak politics in 2019, political scientist Viera Žúborová did not miss a beat. “Zuzana Čaputová,” she said, referring to Slovakia’s first female president, elected in March 2019. “She brought a spirit of positive energy that has broken the bad mood that Slovaks have had for a long time,” Žúborová, an analyst at the Bratislava Policy Institute think tank, told BIRN in an interview.

“She also represented a new hope that Slovakia might take a different direction than the rest of Central Europe.” The election of Čaputová, a 46-year-old human rights lawyer and environmental activist, followed a year of anti-corruption protests and political upheaval in the wake of the murder of investigative journalist Ján Kuciak and his fianceé, Martina Kušnirová.

Calling for a new kind of political culture, she ran on a progressive platform of tolerance, justice and respect for the environment, and stood out from her opponents in presidential debates. “She has changed the way of communicating with voters,” Žúborová said. “When it comes to marketing, she has brought something new to politics, something we’d never seen before — positive communication.”

From the start, campaigning was polarised. Progressives focused mainly on fighting extremism and corruption while right-wing candidates like populist Štefan Harabin and proto-fascist Marian Kotleba stoked hot topics like migration, abortion and LGBT rights. In the middle of all this, Čaputová remained calm, composed and on topic. A month before the election, another progressive candidate, Robert Mistrík, stood aside in favour of Čaputová to help her beat runners from the ruling SMER-SD party and the far right. “They attempted to see the political culture differently,” Žúborová said of Mistrík and Čaputová. “They viewed politics as a real service to people, as a sacrifice of their own ambition, ideas or visions.”

Investigating the state of democracy in the heart of Europe

Reporting Democracy is a cross-border journalistic platform dedicated to exploring where democracy is headed across large parts of Europe. It wants to unleash the power of independent journalism to scrutinise the issues, trends and events shaping the future of democracy in Central, Eastern and Southeast Europe.

Reporting Democracy is run by the Balkan Investigative Reporting Network, a non-profit network promoting free speech, human rights and democratic values in Southern and Eastern Europe and beyond. The programme is supported by ERSTE Foundation. This article was enabled through Reporting Democracy.

After her inauguration, Čaputová set out to win back people’s trust in state institutions and the rule of law. She played a key part in appointing six new constitutional judges and vetoed several pieces of controversial legislation. Recently, she sent to the Constitutional Court a new law that prolonged a moratorium on pre-election opinion polls from 14 to 50 days. In late December, the court decided that the new moratorium will not take effect until the judges make their final verdict. Žúborová said the proposed moratorium was a “threat to democracy” and that the decision of the Constitutional Court will be critical. “It will also show the state of our judiciary and the quality of people the president has chosen for the court.” She added: “The whole year is about her, whether directly or indirectly. It’s about her decisions, about how she transforms the political culture.”

“Person of the Year”

In the months since she took office, Čaputová has defended human rights, women’s rights, LGBT rights and various national minorities. She has given her support to activists and whistleblowers. She has criticised corruption and not shied away from addressing divisive yet important topics. Unlike her predecessor, Andrej Kiska, who was less forthcoming when it came to public relations, Čaputová has given numerous interviews to local and international media and is active in pushing her message through social networks.

In December 2019, Čaputová has been named “Person of the Year” by several Slovak media outlets and listed among the 28 most influential people in Europe by Politico. The New Yorker, The Washington Post and The New York Times have all characterised her as a new hope for liberal democracy. “In my eyes, she represents a kind of a quiet political force,” Žúborová said. “She is the last person who can apply the breaks and lift society out of scepticism.”

As Slovakia looks ahead to a general election in February, several opposition leaders have tried to take a leaf out of Čaputová’s book — but analysts say they have failed to broker a wider coalition or put aside their personal ambitions. Progressive Slovakia, the liberal party that Čaputová came from, formed a coalition with centrist party Spolu (Together) before the European Parliament election in spring, but they did not persuade former President Kiska to join them with his Za ludi (For the People) party. “Slovaks got in a bad mood again because these parties did not follow the emotion that [Čaputová] presented,” Žúborová said. “They lacked the self-sacrifice.” She added that people “wanted to see more than just their own party interests. The parties have stopped seeing the bigger picture.”

According to the most recent polls, SMER-SD looks set to win the February 29 election with nearly 20 per cent of votes. Kotleba’s far-right People’s Party Our Slovakia is on course to come second with 12 per cent. PS/Spolu and Za ludi have stalled, with polls showing support of 20 per cent between them.

“We’re facing a standoff like we haven’t seen in a long time, and in this sense Caputova’s decision could also be very important,” Žúborová said. As head of state, the Slovak president first allows whichever party has the most support in parliament to try to form a government; if they cannot, the president turns to the opposition. “People want change,” Žúborová said. “They are tired of standard politicians and now they’ve realised that Slovakia has been sold out. They want to take their country back.”

Žúborová was referring to a slew of shocking revelations of high-level corruption that came to light through investigations into the murder of journalist Kuciak. But she warned that change can come from either side of the political spectrum. “Kotleba is also an example of change,” she said. “The problem is who took change as their agenda. And the fact that we’re not able to really fight for the message that Ján and Martina have brought here.”

“People want change. They are tired of standard politicians and now they’ve realised that Slovakia has been sold out. They want to take their country back.”

February’s election will be a battle for the character of the state, she said. “And for the direction Slovakia wants to take. Whether we’ll want to be a pro-European, modern country of the 21st Century or join a path of [Prime Minister viktor] Orbán’s Hungary and become a strong, illiberal state.”

The good news for Žúborová is that Slovakia’s democratic institutions and police appear to be doing their job. The trial of Kuciak’s alleged murderers started in December 2019, including the man accused of ordering the killing. Žúborová said such cases were reason for cheer in the run-up to the election.

“Even small symbols are enough for society to start regaining trust. Symbols are important in politics. Čaputová, [Matúš] Vallo and others are an example of that,” she said, referring to the progressive mayor of Bratislava, elected in 2018. Žúborová sees Čaputová as an inspiration to a new generation of girls and young women who look up to her as a strong female leader. “If she keeps up her tempo, she might leave behind a bigger legacy than even she anticipated,” she said.

First published on 30 December 2019 on Reportingdemocracy.org a journalistic platform run by the Balkan Investigative Reporting Network.

This text is protected by copyright: © Miroslava German Širotníková / Reporting Democracy. If you are interested in republication, please contact the editorial team.
Copyright information on pictures, graphics and videos are noted directly at the illustrations. Cover picture: Five days after Zuzana Čaputová had become Slovak President at a concert in Prague, where she says that she understands people who protests in Czechia against the Prime Minister and for an independent judiciary, 20 June 2019. Photo: © Vít Šimánek / ČTK / picturedesk.com 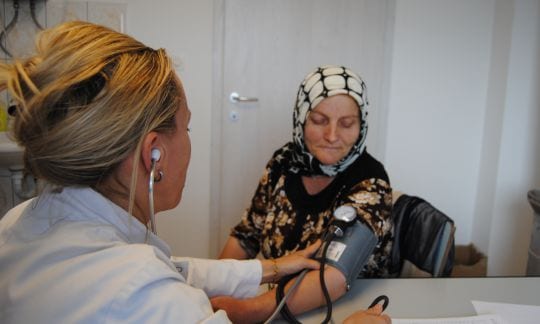 Will the last doctor in Kosovo turn out the lights?

The alarming impacts of emigration 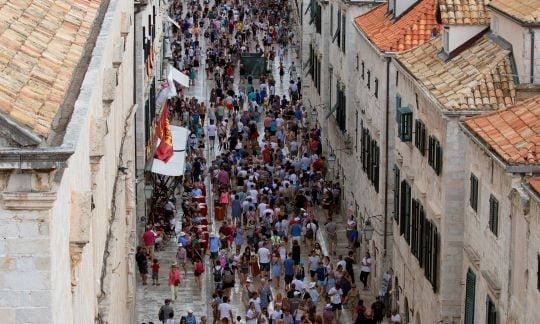 The city is not just an ATM, but also home to its residents.
previous More Stories