“Theatre should be free.”

Even free from the duty of changing the world, says Jeton Neziraj.

Jeton Neziraj, a playwright from Kosovo, focuses on politics and culture, and Kosovo’s journey towards EU integration. He writes actively and tries to put the absurdity of politics into works of art, works that when performed at Kosovo National Theatre spark off intense debate, even political censorship.

He believes in the potential of theatre to inspire change and to influence how we perceive and act upon the problems that surround us. Theatre should be free, he insists, even “free from the duty of changing the world”. Awarded the European of the Year prize for promoting European values, in an interview with Shqipe Gjocaj he elaborates on the irony of such an acknowledgment, since shortly afterwards he was refused a Schengen visa to travel into the EU as a free working European.

What are you working on at the moment?

I am writing a new play which goes by its provisional name The Hypocrites. The rehearsals began in the first week of September, while the premiere will take place on 19 October in Prishtina. It is about degrading medical ethics, the failed health system in Kosovo that has collapsed almost entirely and remains one of the many disgraces of this society. So it is about the utterly corrupted health institutions that violate every human principle and treat a person’s health as nothing but a coin. Thus, the play “cuts open” present-day society in Kosovo, including my current obsession which is the complicated relationship between the locals and the internationals.

What do you mean by that?

Pretty much like those complicated relationships among couples who love each other but have endless quarrels at the same time, leading to breakup or “kiss and make up”. Earlier when Kosovo was under UN administration, the internationals in Kosovo established a parallel world alongside the locals. They had their own restaurants and bars, their own parties and would never mix with the locals, unless necessary.

“The colonial approach towards Kosovo has not changed.”

However, with the arrival of the new mission in Kosovo, that of EU, things have changed for the better. Nonetheless, the colonial approach towards Kosovo has not changed. Many of them come as experts and get paid extremely well but their expertise has not proved satisfactory. They often ignore the potential, the capacities, and the knowledge of the locals. This makes most Kosovars feel quite frustrated. Internationals also serve as tutors for many institutions in Kosovo, particularly those related to justice, but somehow they get to participate in the economic crimes and “do the knitting of Kosovo’s underground”. I have elaborated this topic in my play called The Internationals.

What are the main topics that you explore in your works?

Lately, mostly political ones. And often, the main topic is not necessarily political, but it becomes such by the way I regard it, as well as by the way it is put onto stage. Thus, it is about a theatre whose content and staging is political. If health is the topic, I don’t simply talk about a group of compromised and corrupted doctors, but about a society caught in the net of crime in the health sector. I speak about a political class at the head of the state that is not only incapable of fixing a big problem such as the health system, and is prepared to tolerate the situation, but that even becomes a “stakeholder” in sharing ransoms and profits, all at the expense of the people, the patients and those in trouble who have no other choice.

I believe theatre communicates things in a more sensitive way, through play and fun, and by appearing “neutral”, so to speak. And that is why we insist on quality theatre, powerful theatre, with sophisticated aesthetics, free theatre. Only this kind of theatre might have a deep impact in society and eventually bring about change. The most useful theatre is a free theatre, also free from the duty “to change the world”. Theatre changes the world only by being free to act, with no constraints whatsoever, even without the burden of having to change the world.

How does the Kosovar audience react to the topics you explore, the images you promote, the messages you put out?

The response has been varied, and several of the performances have been given with the police’s presence. Protests, discontent, public reactions, critical articles, are all tolerable and normal for a theatrical performance.

“Intolerable are acts such as a fake bomb alarm in the theatre as happened while ‘One flew over the Kosovo theatre was being performed’.”

What I don’t think is normal or tolerable are acts such as, let’s say, a fake bomb alarm in the theatre as happened while One flew over the Kosovo theatre was being performed. It barely made it as a premiere at Kosovo National Theatre in Prishtina in 2012, since the government, through the Ministry of Culture, tried to stop it. 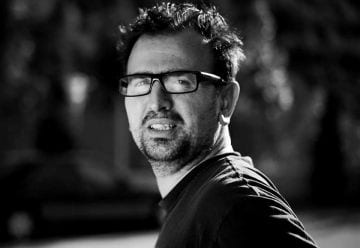 Jeton Neziraj is a playwright from Kosovo. He has written over 20 plays that have been staged and performed widely in Europe as well as in the USA. His plays and his writing have been translated and published in more than 15 languages. The German theatre magazine Theater der Zeit and the German radio Deutschlandfunk Kultur have described him as “Kafka of the Balkans”. His work has been awarded with several important local and international prices and awards. He is also the Director of Qendra Multimedia, an independent cultural company focused on contemporary drama and theatre.

The story about this intended censorship is a long one, but I will try to tell it briefly. During the final phase of rehearsals we sent two sets of satirical press releases to the local media where we explained that this national performance had the blessing of the Kosovo government and that the government had established a state commission to analyse every line of this significant national comedy that elaborates on Kosovo’s independence. We had also written that the godfather of the play’s title was Kosovo’s Prime Minister (at the time, Hashim Thaçi).

These satirical projections were taken literally by most media in Kosovo. I remember that one newspaper published an article with the title Hashim Thaçi, godfather of Jeton Neziraj’s play. The readers were quite confused. They commented by insulting us, calling us opportunists, asking us how much money we got from Thaçi. Then there were others who saw this “cooperation with the government” as normal, and would say good things about us.

The purpose of this press release was to encourage a debate before the show, a debate about the political control over the theatre that was flourishing at the time. This performance as well as other events led to the Ministry of Culture’s determined attempts to make it impossible for the show to take place. The show was enabled only with the intervention of three or four ambassadors in Kosovo. I won’t go into details, but I will say that the attempt to enable the show is good material for a second comedy.

How much does the state of Kosovo invest in art and culture?

Very little, unfortunately. Not only is the budget distributed for culture low, but there is a lack of meritocracy or a system of values. The budget goes to the obedient artists, i.e. those closest to the political parties, and often to art dilettantes who in reality do nothing but money laundering.

Meanwhile, the critical voices and those who all these years have tried to maintain a certain artistic dignity struggle with access to public funds. In this respect, it’s the international donors, foundations and different organizations that have helped the cultural scene in Kosovo, or more specifically, Kosovo’s independent cultural scene.

Speaking of independent cultural events: Your organization, Qendra Multimedia, provides the annual and only literature festival polip. Why the initiative?

The International Literature Festival polip started nine years ago as a small initiative for communication and exchange within the alternative literary scenes between Kosovo and Serbia. Later on, it got extended and grew into an international literature festival which hosts well-known authors from around the world, as well as young authors from the region. In every edition, we give a voice to new literary names and we continue to expand the presence of writers and musical groups from the region. Furthermore, it continues to serve as a literary bastion that promotes critical voices, rebellious voices, a literature liberated from dogmas, a literature outside governing control and one that does not fit into the school books approved by various ministries.

On 9 May 2018, you were awarded the European of the Year Award by the European Union in Kosovo. What does that mean to you?

Of course I felt honoured. An acknowledgement such as the European of the Year is meaningful and encouraging because it proves that all this work and engagement has gained someone’s attention – especially since criticizing in Kosovo has been just like walking in a minefield.

Ironically, just before I received the prize, the team of my show was going through an unprecedented odyssey in the attempt to secure the visas in order for us to travel to Timisoara, to the international theatre festival where we were officially invited.

“For us Kosovars, the system of the Schengen visa has turned into a scarecrow whose aim is to insult, humiliate and dehumanize us.”

Unfortunately, the trip failed because we couldn’t secure the Schengen visas. For us Kosovars, the system of the Schengen visa has turned into a scarecrow whose aim is to insult, humiliate and dehumanize us. And that is how I see it, simply the irony of being rewarded for the motive of “promoting European values and ideas” on the one hand, and the violation of the right to travel (in the attempt to promote and preserve those “European values”) on the other.

What do you think Kosovo’s EU membership will bring to Kosovo’s creators?

I don’t think either people in Kosovo, or the artists, are so naïve as to believe that once Kosovo gets EU membership, all problems will be solved. The process of visa liberalization and the eventual accession of Kosovo to the EU will fulfil some of the basic principles such as the free movement and the opportunity of people to visit some European countries that they are currently unable to. Artists would be able to travel to Zagreb and see a theatre show or an art exhibition; they could participate in film auditions organized in Berlin, and so forth. Thus, several basic benefits would come automatically. But we must try to resolve many other issues ourselves, with patience and dedication.

This text is protected by copyright: © Shqipe Gjocaj / ERSTE Foundation. If you are interested in republication, please contact the editorial team.
Copyright information on pictures, graphics and videos are noted directly at the illustrations. Cover picture: Scene photo of “One Flew Over the Kosovo Theatre” – performance. National Theatre of Kosovo 2012. Photo: © Avni Selmanig 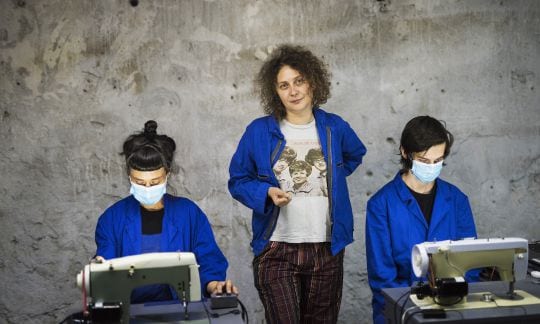 Europe in the cellar 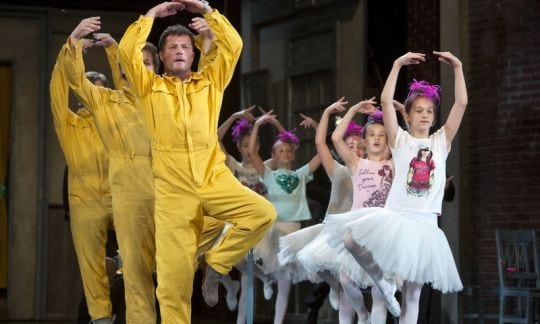 The surreal dance of Billy Elliot in Budapest